Reviews have just come in for WITHOUT REPROACH. Here's a couple of snippets from them.
****
Romance Reader at Heart. Review Rating: Top Pick!

Without Reproach is about redemption. It’s about learning to love and trust again when life destroys everything you’ve ever known. Without Reproach is about three strong, wonderful woman and their ability to learn how to love life and each other. Thrown in along the way is some great romance that adds a little something extra to the book. Janet Woods is always a must read for me and this book proves once again how phenomenal a writer she is!
Kristal Gorman


Woods gives her fans a well-written contemporary romance full of her trademark endearing characters, ensuring that fans of her historical romances will feel right at home. Booklist.
*****
This will probably be my last blog before Christmas, unless something exciting happens. Christmas is always tiring, always expensive, and this year it's even more so with the worry about the recession affecting us all. To all the mums and dads, grans and granddads, teenagers and kids of all ages. It's the thought that counts. Love costs nothing to give and receive. All best wishes.I hope you enjoy Christmas, and that 2009 is a wonderful year.
Posted by Janet Woods at 10:40 PM 1 comment: 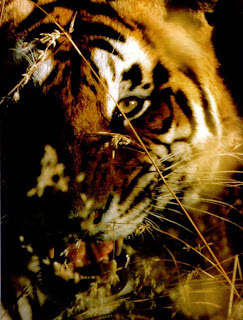 The port town of Fremantle here in Western Australia is normally a friendly town. It's small, pretty. It has a fishing harbour where you can get a wonderful fish meal with the fish almost leaping straight from the ocean into the pan. We have an old town hall with a spire and a flag on top. It's smack dab in the centre of the town, so if you do happened to be directionally challenged, as am I, all you need to is to head straight for it and you're back into the thick of things again. At the beginning of this week it became even more friendlier for me.

I was Christmas gift shopping, when I saw a rather large stuffed tiger with a curling plastic tongue and fearsome teeth. By large I mean five foot from its front paws to the lip of its tail, or about 152 centimetres for you newer folk (I think). But never mind. It was big!

I just had to buy it for one of my granddaughters. I was already dragging a loaded trolley behind me and had a couple of dangling bags. The tiger was too big to fit in a bag, so I tucked it under my dangling bag arm, face to the front so it could see where we were going, its tail hanging down at the back and lashing at my ankle. We set off confidently to find my husband, who would relieve me of my packages, since he had the keys to the car and I still had more shopping to do. That took some time, since he'd gone to ground somewhere.

Like I said, Fremantle is normally a friendly town, but with the addition of my tiger it became even more friendly. Tiger seemed to be endowed with special powers of attraction. Everyone who set eyes on him smiled, others made remarks as they passed like, like 'Oye, can I pull your tail?' or 'Does he bite?' or 'Do you know you've got a tiger under your arm?' Duh!

Some people growled or roared. It all seemed a rather normal reaction and interaction with complete strangers under the circumstances. When I sat to rest I was approached by several old ladies who stopped to admire the beast. Kids came up with their mums and dads to stroke him or touch his teeth, while I made insane growling noises. Even a tired toddler stopped his tantrum long enough to gaze open-mouthed at him. I have never held so many conversations with strangers, or been so popular. It struck me that people wanted to talk, and the tiger acted as a legitimate excuse to do so.

When we got it home I laid Tiger along the back of the couch, where he looked quite relaxed and at home for two days. He was rather difficult to wrap because his tail kept springing out through the paper, but now he's mummified in wrapping paper covered in flying angels, so he looks more like a gaudy sphinx guarding the Christmas tree. I can't wait to see my granddaughter's face when she sets eyes on him!

The moral of this tale is - whatever your age - if you want to be a magnetic chick, or even a magnetic cockerel come to that (though they're in short supply at Christmas) get yourself a big tiger and walk around town.
Posted by Janet Woods at 4:42 PM 5 comments: