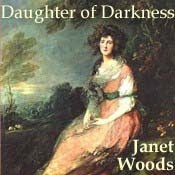 A long time ago, I wrote my 2nd book. It was called Daughter of Darkness. As a beginning writer I spent a great deal of time on it, drawing on my scant knowledge of writing practices at the time to perfect it.

I entered the manuscript into a national competition for unpublished novels, which was sponsored by Random House and Australian Women’s Day. To my delight it was placed third from out of the hundreds of entries, and I won $2,000 for my efforts. I was delighted by this encouragement. Unfortunately, only the novel that won the competition was published. I sent the manuscript to Robert Hale, a library publisher who decided it was written well enough for public consumption.

Daughter of Darkness was published in 2001. The following year I decided to enter it in the mainstream section of the Romantic book of The Year award, an annual competition which is run by the Romance Writers of Australia. It won!

The book has long been out of print, though now and again a used copy turns up on the net, offered by some enterprising person for a hugely inflated price!

Readers often write and ask me where they can buy it, which prompted me to investigate electronic publishing. I gave the manuscript a light edit, but generally ignored the urge to unravel it all and rewrite it completely, because it still works as it is.

So I’m happy to announce that the book has now become available for download in ten formats, from Belgrave House. http://belgravehouse.com/bookstore/
The cost is US$5.00
Posted by Janet Woods at 8:35 PM 2 comments:

Sea captain Nick Thornton cannot wait to go back home to Dorset and see the woman he’s loved since childhood: Charlotte Honeyman. Nick is determined to leave the sea behind and to settle back home and open an emporium with Charlotte by his side as his wife. But on his return, Nick is shocked when the woman whom he has loved for most of his life coldly announces that she has married another man and that she never wants to see him ever again.

Charlotte Honeyman has always been aware of the fact that Nick was infatuated with her, but she could never consent to reciprocating his feelings; not when his uncle, Erasmus, was responsible for the death of her beloved mother. Crushed and heartbroken, Nick cannot believe that the woman whom he was head over heels in love with now belongs to another man. Realizing that he can no longer stay in Dorset now that his beloved is somebody else’s wife, Nick decides to head back to sea, but he vows to make Charlotte pay for this cruel betrayal…

Charlotte’s younger sister Marianne was flabbergasted when her elder sibling announced that she was marrying another man – and she was mortified when she heard Charlotte tell Nick that if she ever saw him near her again, she would shoot him! Determined to apologise on her sister’s behalf, Marianne heads to Nick’s ship before it heads off to Boston to atone for her sister’s less than ladylike behaviour, but when she has an accident on the ship, she finds herself trapped on board the vessel…and in close proximity with the brooding and dangerous Captain Thornton!

Nick is delighted when he finds a helpless Marianne Honeyman in his cabin, desperately needing his aid – and realizes that he’s finally found the perfect way to revenge himself upon the woman who scorned him: he will seduce her sister and marry her in order to save her reputation. Marianne is well aware of the reason behind Nick’s seduction, but in his arms, she cannot help but wish that her husband would realize that the younger Honeyman sister has been in love with him for years!

The more time Nick spends with Marianne, the more he finds himself attracted to her. Is he falling in love with his convenient wife? Or will his desire for revenge blind him to what’s in front of his very eyes?

Written with deftness, confidence and style, Salting the Wound is an outstanding historical romance featuring a wonderfully gutsy heroine who jumps off the page, a swoon-worthy hero, a well-rounded cast of supporting characters, poignant and riveting romance and an intriguing and dramatic sub-plot which will keep readers riveted until the final page!Fast-paced, dramatic and wonderfully romantic, Salting the Wound is another winner from the exceptional pen of the fabulous Janet Woods!

Reviewed by Julie Bonello - http://singletitles.com
Posted by Janet Woods at 6:54 PM No comments: