It's not often that audio books get an airing on my blog. I don't know why, when most of my books are available from ISIS Soundings in audio form, as well as print. So this is to introduce my two latest books, 'Salting the Wound' which is read by Gordon Griffin. Gordon is a new reader for me. I'm quite looking forward to hearing a man read my work. It will be a change. The sequel,'Straw in the Wind' is read by Patience Tomlinson, a reader I'm familiar with, since she's read some of my earlier books.

People have asked me if I listen to my own work being read. Yes, I do. The readers bring a fresh eye to your work, and although the characters might not appear to be interpreted as you wrote them, the fresh slant on them is interesting.

Each disc lasts about an hour, and the whole book takes up approximately 8 discs.
For those of you who walk on a treadmill for exercise (as I do), this is an ideal way of "reading a book" especially when using headphones.
Posted by Janet Woods at 1:11 PM No comments: 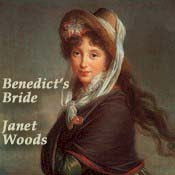 Amber Rose Hartford’s grandfather made her dowry dependent on her marrying Viscount Costain. Though unaware of this condition, Benedict accepts it for more than one reason. He rescues Amber from her disreputable cousin Patrick, but before they can marry she is abducted. A large ransom is paid but Amber is not released. Benedict must rescue her again—and convince her of his honorable intentions. Historical Romance by Janet Woods; originally published by Belgrave House
Posted by Janet Woods at 6:34 PM 2 comments:

This is not about undressing them, though it is handy for historical authors to know what’s worn underneath the period woman’s skirt, Whether it be Amelia’s Bloomer's bloomers, Victorian divided drawers, the 1920s combinations, sexy wartime camiknickers or no knickers at all.

Men and woman have strapped themselves into various uncomfortable supports, bustles and shape-changing devices in an attempt to meet the fashion of the day, but prior to the Victorians, who also put pantalettes on the legs of a piano stool - wearing no underwear was more common than not. Hmmm . . . can you actually wear no underwear? I'll leave that one for you to ponder on. I wonder though, why were Victorian gentlemen so turned on by piano stool legs, that they had to be kept hidden from him?

So what is this blog about? It’s about investing emotion into characters, getting down to their bare essential and endowing them with characteristics that will appeal to readers.

What does does your heroine look like? Yes, you can use a character who is of average height, and has brown hair and blue eyes. Most readers are ordinary people, and can relate to the standard. So be careful to endow characters with a touch of the commonplace.

Remember that a person can change. Love will make the pheromones fly! The skin will glow, the eyes shine, the smile become more spontaneous. As always, the adage applies. "Beauty is in the eye of the beholder." In one sense that means that the eyes light up like a set of headlights, when one's beloved comes into view. But being desired, or desiring another, always makes a character look, appear and act more attractively.

All this can be shown to the reader as it happens, by putting yourself in the character's skin and using the senses of smell, touch, sight, hearing and taste. If the characters come with all the beauties and graces described up front and already installed, then how do you improve on it?

Body language can convey feeling instantly. A look over a shoulder, a gaze avoided, a smile exchanged or a squeeze of the hand, or just the way a glance slants . . . on a woman's breast, into her eyes or upon her lips can say a lot. So can the two finger salute when she says no!

In your own writing (and I still catch myself doing it too, but hey, that's what editing is for) how often do you start a sentence with: She had the feeling she was naked when he looked at her? She felt as if her heart was going to fly? She felt a smile creep across her mouth? This is wishy-washy and passive telling. It is much more active to put: His glance stripped her bare. Her heart flew from her chest. A smile crept across her mouth.

Emotionally . . . if you want a character readers can relate to, you have to have to give your characters a depth of feeling. What they say, do, feel or think should be reflected in your characters, thoughts and deeds, right from the very beginning.

Telling the reader a character is arrogant means nothing. Show the character being arrogant, then show him with a weakness, however small, to make him likeable. Perhaps he could acknowledge his own arrogance.

Be consistent with showing positives. Have your heroine do little kindnesses, and think kind thoughts. If she sees a beggar in the street let her give him a coin. If you have a spirited heroine, make sure her nature doesn't become shrewish in the cause to prove herself. There is a big difference between having a spirited heroine and a nasty one. Learn how to give and take. Use wit rather than spit!

I could go on and on with this subject, but I won't. I'll just go back to the Victorian piano stool. Its frills hide the solid support structure – the bare essentials of its creation. It didn't just arrive. It came from somewhere, and was once part of a tree.

So did your character. She arrives naked – a standard person without baggage or memory, waiting to be given an identity and brought to life. She has a zip down her back. Open it. Get inside and walk over to the mirror while you get used to your new skin. Now . . . begin your creation.

Start by giving her an identity, a past. She has family, a school, sport and profession. She has hopes and fears, feelings and ambition.

One last word. Be sensitive to your character's needs. Feel the emotion, walk in their skin. Go on then, it's not that hard. No wait . . . come back, you're naked! How about you put a few clothes on first . . .
Posted by Janet Woods at 3:12 PM 4 comments: