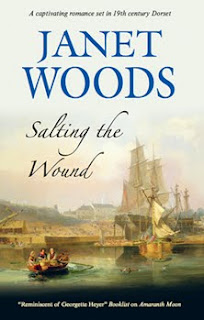 Follows is a top pick review by Kristal Gorman from Romance Reader at Heart.

Nicholas Thornton has come home at last to claim his bride.  After years back and forth at sea, he is now ready to settle down with the woman of his dreams.  He has big plans to come home and marry his childhood sweetheart, even if the last time he was home, she rejected him and broke his heart.  Sure that she has now come to her senses, Nick arrogantly decides that he is going to go out to Charlotte's house and find a woman who is more than willing to marry him.  But the reception that he receives is much different than the one he had thought.  Because the woman that he has loved all of his life is already married to someone else, and when Nick shows up at her door, she shows him the business end of a rifle!

Nick retreats to lick his wounds, vowing to find some way to make Charlotte pay for this humiliation.  When Charlotte's little sister Marianne decides to try and make things better and go to visit Nick on his ship, she has no idea the trouble she has gotten herself into. When Nick finds her hurt on his ship two days out to sea, he doesn’t do the "gentlemanly" thing and return Marianne to her home right away; instead, he decides that sweet revenge is staring him right in the face.  To his way of thinking it would serve Charlotte right to be worried and furious over her missing sister.  What Nick doesn't count on is the feelings that he discovers for little Aria Honeyman.  Long gone is the little girl that he used to tease all the time, and in her place is a beautiful, vibrant, young woman, one he finds himself increasingly drawn to.

I LOVE Janet Woods style of writing.  I haven't been disappointed by a single book I have read of hers, and I have read them all!  Nick and Marianne have fabulous chemistry and the writing flows beautifully.  Ms. Wood's simply knows how to tell an excellent story with captivating characters and situations.  I highly recommend SALTING THE WOUND if you are looking for not only a page-turner, but also a new book for your keeper shelves.
Posted by Janet Woods at 6:40 PM 5 comments: