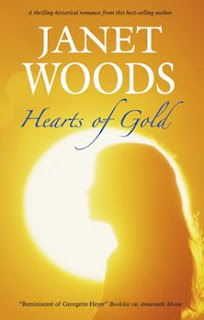 1890 Western Australia. 14-year-old Sarette Maitland is orphaned when her father dies from a snake bite on the goldfields. Left to fend for herself by her father's villainous partner. she is rescued by wealthy adventurer, John Kern, and takes the place in his heart of his own dead daughter. Several years later he reluctantly send her back to England, to learn the manners that society expects of a beautiful young woman.

After tragedy strikes, Sarette finds herself place in the care of John Kern's heir. Magnus is a far cry from his easy-going uncle. When he learns that Sarette had been left a considerable fortune by his uncle, both his honesty and his heart are put to the test . . . as well as his courage when the man who murdered his uncle arrives on the scene, and Sarette if the only person who can identify him.
Posted by Janet Woods at 5:01 PM