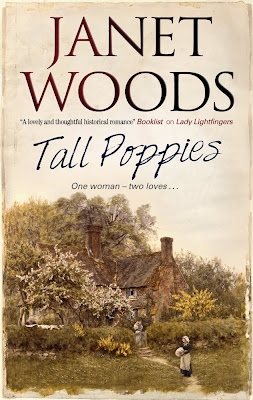 If it's not enough that a girl from a good background is forced to work as a maid, Livia Carr is then violated by the master of the house and becomes pregnant. Her only course is to marry the son of the house. Richard Sangster is an invalid, a world war one hero. He is not expected to live, and he offers Livia and the child legitimacy, as well has his name and estate. Livia grows to love Richard, but even though it's expected, his death comes as a great blow to her. Into the breach steps Livia's first love, and Richard's closest friend, surgeon, Denton Elliot. But will he desert Livia when the secret of the child's parentage is revealed to him. . .?

When I came up with the idea of a woman who loved two men equally, I was a bit dubious that I could pull it off, and still create reader empathy with my two leading men. I was also worried that making one of them an invalid might be going a step too far - and wondered, would I capture them as authentic as men with their own point of view? I'm assured that I did. In the words of my editor, who is a man, "I thought this was a wonderful story that keeps you gripped until the very last pages – very glad there was a happy ending after so much strife!
Posted by Janet Woods at 3:05 PM

Lovely cover, Janet. No wonder you're so pleased.

Can't wait to read it, Janet. I often have two loves for my heroine. LOL
Lovely cover too!

Great cover, Janet. And of course you could pull off that story idea. A woman of your experience! Hope it sells a zillion!

Having read the beginning I can't wait to finish it!

You can tell before you even open it that this is going to be a gorgeous read. Congratulations, Janet.