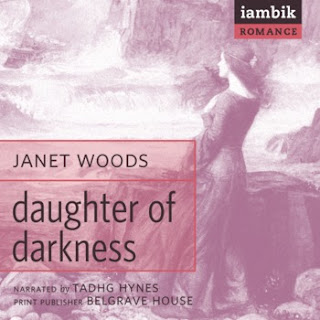 History of this novel.

2001. “Daughter of Darkness” was published in hardcover by Robert Hale Ltd. UK, and mainly for libraries distribution.

2002. It won the mainstream section in the Australian, Romantic Book of the year Award.

2002 – 2010. It was read by library patrons, and gathered dust. A copy was listed as “lost” in a New Zealand library. I was a bit chuffed to think someone might have liked it enough to steal it . . . but, then, perhaps they wanted it for a doorstop! I never checked back to discover if it had turned up.

2010. Toot de la toot! I got the rights back, blew the dust off, and to my surprise, went international.

Belgrave House USA transformed it into an ebook. Then Brazilian publisher, Nova Cultural picked it up and translated it into Portuguese. Shades of Carmen Miranda! (She wore hats made of baskets of fruit and shook her hips like crazy) Can’t remember her? Well okay . . . you can probably look her up.

To move on . . . shortly, another English version of “Daughter of Darkness” will be released by large print publisher, Magna. Hopefully, the latter will replenish dwindling library stocks, as well as New Zealand doorstops.

Now we have the latest version, in downloadable audio form, and recently released by IAMBIK of Canada. I got to pick the reader from voice auditions, and chose Tadhg Hynes, who has a lovely Irish lilt to his voice. I think the rest of him is invisible, since I can only find a photograph of his glasses, and suspect he may be a leprechaun.

Anyway, here’s a plug for my Canadian version, which can be downloaded very cheaply from iambic . . . I love the cover. It makes me want to sing Wagner! Don’t worry; I’ll spare you that little treat! Instead, I’ll say hello to my Canadian readers. I know I have a few, since I get letters from them now and again.

Set around 1750 in Dorset, DAUGHTER OF DARKNESS is the story of Willow Givanchy, daughter of a reputed witch and a corrupt Marquess.

A marriage is arranged, and Gerard Lytton is tricked into becoming the groom to the reluctant bride.

This is a slightly gothic tale, but not horror driven. It’s a story-driven romance. A raven appears . . . deaths follow. Against all odds, Willow and her husband fall in love.