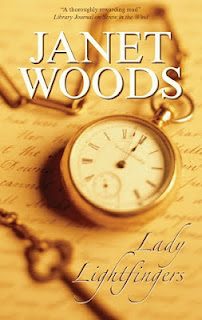 
Celia Law is the daughter of an Englishwoman who was hoodwinked by the man who fathered Celia and quickly deserted both of them. Although Celia longs to take revenge against him, she is living a life in London in 1850 that requires the conniving skills he possessed. She begs and picks pockets in a crafty style that makes her victims angry but confused by her innocent looks. She is trying very hard not to turn to the life of a prostitute as her mother was forced to do out of dire poverty.
Without spoiling the story, Celia, after her mother’s brutal, untimely death, comes under the wings of one poet/scholar who does much good for the poor. It is he who encourages Celia to continue writing in the book she entitled, Famous Fictional Tales from the London Slums. Celia is then forced to escape the wiles of a woman who extorts money from prostitutes and travels to her aunt’s house, only to find only Aunt Harriet alive and welcoming. Then Celia encounters two men from her past life in London, one who is unsure about her “potential” as a socially acceptable lady and the other who is constantly drawn to her despite his words. Finally, Celia will discover some truths about her origins that will be shocking to characters and readers.
The essence of surviving poverty is not always so easy to define. Janet Woods writes in a Dickensian style but with more of a balance between the light freedom and weighty darkness of that period. Lady Lightfingers is a wonderful story that depicts the social problems of 19th-century English life but also offers a coming of age, historical story that will delight every reader. A fine, fine novel!
Posted by Janet Woods at 12:59 PM