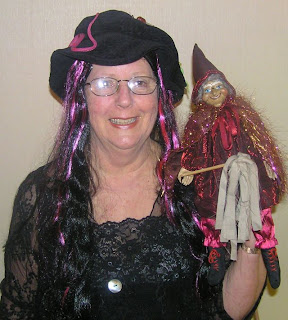 I’ve never yet been to a romance writers conference where we haven’t been laughing our heads off over something for most of the time. The 2008 Romance Writers of Australia conference in Melbourne in August was no exception. Over 200 romance writers, large and small, old and young, published and unpublished, and from all over Australia - met at the Langham Hotel for three days of business, workshops, networking and socialising. There were raffles to raise money for breast cancer. Door prizes. Cocktail parties. Book stalls and a surfeit of food.

Add to that a book launch at Dymocks for Bronwyn Parry’s first book, “As Darkness Falls”, which is published by Hatchette Livre. There was a side trip to a historical costume private museum, a dinner for those of us on the writers E list, and a trip to a chocolate factory. And that was on the Thursday before the conference! Unfortunately, for some reason unknown to the passengers, my plane - which had been booked and paid for since the previous April, and which had had the flight time changed three times in the months since - was, on the day, changed from a direct flight to Melbourne to one diverted to Melbourne via Sydney. (Hmmn, I think I blogged about late transport once before!) So I missed the historical costume tour, which I was really looking forward to.

Friday was devoted to an all day workshop. Saturday and Sunday was more of the same, plus eat drink and be merry with a dress up cocktail party. See photograph of me with my granddaughter sitting on my shoulder - and we weren’t the only witches there. We could have raised a coven. Sunday evening was the awards dinner. We ate very small, very delicious meals on very big plates and cheered on those of our fellow writers who had scaled the dizzy heights of winning awards by entering the various competitions hosted by the RWA.

On the whole romance writers are happy people. Perhaps it’s because we love writing about love - about people falling in love - being in love and doing the love thing. We love love.
Laughter is infectious, and the laughing disease was certainly caught by all of us over the weekend. The place was full of smiles, and there was not a grumpy face in sight.

Going back to Western Australia, the transport system worked to perfection. The plane took off right on the minute. There were no bumpy clouds to make the passengers nervous. The wheels and wings stayed on and we landed smoothly. My husband wasn’t there to meet me. He’d expected me the following day. You’ve gotta laugh!
Posted by Janet Woods at 12:50 AM

Janet, you look absolutely wonderful. Thanks for sharing your experience of the conference. I hope to make it next time!
E :)

Hi Janet,
What a great costume, eh?? lol where were you... with so many in attendence it was hard to spot anyone, if you know what I mean.

Oh no, and hubby thought you'd be one more day... what a disaster.. I told my hubby he betta not forget or else. hehheheheeh

All the best, thanks for sharing.

Janet, I've never pictured you a witch. You look the part, I’m sure you were only pretending. Glad the RWA went off well. Hubby must be made a fine stuff. I was twenty-four hours late for an important something (I’ve forgotten what it was) some thirty-seven years ago. After a time of close scrutiny she decided to take me in although there was a good deal of re-education. I’ve never been late since but she still reminds how unreliable I am. ---- Regards, Eric

Janet, fantastic costume, even though you took your wig off early in the evening. It was a fabulous conference and I agree, I don't recall seeing a grumpy face even once! Except maybe mine on the Sunday when it was time to leave.

Janet, you were indeed an inspiration for us all, the confusion with your flight being enough to make anyone a grump and yet you smiled all weekend. If you would like to see some pictures of the costumes I took around 100, so would be delighted to send you some. Look forward to seeing you again soon and bought one of your books so that I could have a good read. Shelley F

LOL regarding your husband not ready to meet you on your return - perhaps he needed an extra day?

While you were away at RWA melbourne conference, I participated in Clayton's and won one of your books, "The Coal Gatherer". Just wanted the opportunity to thank you for it and let you know I'm looking forward to reading it!

By the way, you look bewitching :)(sorry couldn't resist)