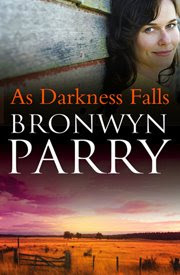 I’ve heard people state that they only buy books written by authors whose work they know. What a shame that those short-sighted people are missing out on novels from new talent, like Australian writer Bronwyn Parry, whose first book was published this year.

AS DARKNESS FALLS is a romantic suspense that sits squarely within its genre, in that the romance is equally balanced by the story line. Two detectives, both wearied by the demands of their job - one to the point of being burned out - join forces to find a missing child before she is killed. The girl is one of three victims. Also a victim is Isabelle O’Connell the female police officer who was badly injured by the occupants of the small Australian country town she grew up in - when she single-handedly, and without success, tried to defend an innocent suspect from the town’s wrath. Along comes DCI Alec Goddard. Far from being a white knight, the battle weary city cop needs Isabelle to help him solve the case, and he plays on her conscience until he gets his way. Alec then finds himself becoming her protector as the deadly cat and mouse game with the criminal begins to unfold.

This is a story high in tension. There is the inner turmoil of the main characters, then the fact that the villain is always one step ahead, which that makes him an insider. There is the need to protect the female lead from danger, and from that the love story flows. But the instincts and needs of love are hard fought. These are two intelligent people who have had their fingers burned before, and the involvement is reluctant. The motivation of the main characters is well set up, consistent and clear, which gives the reader empathy with those characters. The book has a good visual scenic sense and is high in adventure. To my mind it would make an excellent tele movie.

AS DARKNESS FALLS is a gritty, well-written novel with a high sense of human drama and tension. It dishes up exactly what the cover suggests - a meaty and satisfying meal between the crusts.