The Sheriff and the Baby 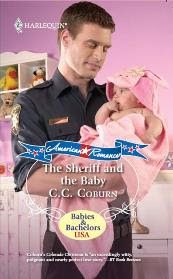 The Sheriff and the Baby – CC Coburn (Harlequin American Romance)

County Sheriff, Matt O’Malley is haunted by a personal tragedy. It’s something that could have been avoided had circumstances had been different, but his dream of raising a family in the lovely Rocky Mountain home he’d planned, had to be abandoned because of it.

A woman is driving in a snowstorm. She’s in labour, and is fleeing from the men who killed her husband. When her car is forced off the road, Matt is the only one there to help. Putting his duty before his instincts he gets her to hospital and he stays with her while she gives birth to her daughter. The woman calls herself Beth Ford, and for reasons she can’t disclose she fights the growing attraction between herself and the sheriff.

Matt senses that Beth’s lying, in more ways than one, especially when she puts his name on the birth certificate as the baby’s father. But Beth brings out the protective instinct in him. With perseverance he gleans more information – enough to make the enquiries that alert her pursuers to her whereabouts. Eventually, Beth trusts Matt enough to tell him her story, by which time they’ve fallen in love.

I first met Matt, his brothers, and the rest of O’Malley family in Colorado Christmas, the first book of the series. I like this bustling family, with their push and shove, their kids with attitude, and their abundance of nosiness. This second book has a large dollop of the same heart-warming charm, plus a sense of danger and intrigue that keeps the pot on the boil and the tension high until the very end. A good read that I highly recommend.
Posted by Janet Woods at 12:58 AM