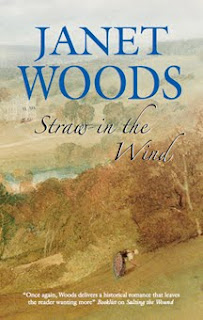 Another review…this time one for my own book STRAW IN THE WIND. It’s particularly pleasing to have a novel reviewed like this, especially when the opinion originates from a source such as Library Journal.
***
www.libraryjournal.com

Hired by sea captain Erasmus Thornton to investigate his suspicion that the daughter he had fathered 18 years earlier may not have died at birth as he'd been told, Det. Adam Chapman sets out to learn the truth and ends up falling for housekeeper Sara Finn, the mystery woman he has been sent to find. Vivid descriptions, a fascinating assortment of secondary characters, and snappy, clever dialogue make this a memorable treat. Verdict: Woods's touching, mystery-laced story features a plucky, outspoken heroine and an intriguing plot; and it satisfactorily continues the tale begun in Salting the Wound. Although a sequel, this novel stands on its own, thoroughly rewarding. Woods, particularly known for her well-researched, emotionally rich historical novels lives in Perth, Australia.
***
October 28th sees the release of my next book, PAPER DOLL. For a change this book is set in 1920s England, shortly after the end of WW11. Many authors have favourites amongst their books. PAPER DOLL is one of mine…but more of that at a later date, when I’ve done the copy editing and have been sent my cover.
Posted by Janet Woods at 12:04 AM

I love the title.