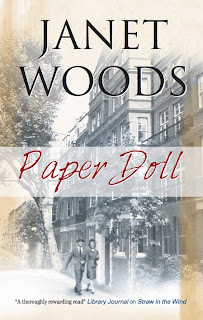 Once a perfect daughter, who inspired her toy manufacturer father to create a paper doll in her likeness, Julia loses her fiancé in WWI. With no plans for the future, she gads about with a fast crowd, much to her father's dismay.

An older business acquaintance of her father's, Latham Miller, saves her from a cruel trick, but there is something about Latham that disturbs Julia. He asks her to marry him, and she is reluctant to say yes. Instead, she is intrigued by her father's new manager, Martin Lee-Trafford, a doctor during the war who had a breakdown and returned home.

But when her father becomes ill and asks Julia to marry Latham, she dutifully obeys. Latham turns into a different man after marriage, determined to do whatever he wants with whomever he wants, so Julia starts an affair with Martin.

Woods tells a tale of the tumultuous, roaring twenties filled with glamour and sex, a wild ride that will leave readers breathless and ultimately triumphant.
--Booklist, February 1st, 2011
Posted by Janet Woods at 6:20 PM

Great review Janet! But then all your books are great.
CCx

Love the sound of that book Janet! A truly good review - I hope it's going to be available locally?