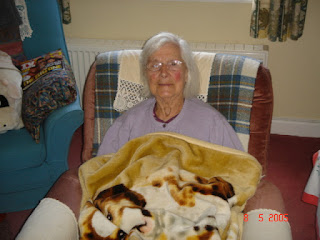 My own piece of living history passed away last month - my mother who'd reached the grand old age of 105.
There was a sense of her living forever when she passed the century post, and I stopped expecting her to die. So oddly, the news of her demise came as a bigger shock than I expected.
Hilda Harrison was born into a fisherman's family in Seaton Carew, Durham . . . one of 11 children. She was sent to London when she was fourteen, there to become a maid in a block of serviced flats. Most of her wage was sent home to help her parents bring up her younger siblings.
She met my father, Stanley Targett, in Hyde Park, where he was taking his turn on a soapbox. He was a widower with two young daughters. My mother produced two more daughters (of which I’m the fourth) then my brother came along. It was a marriage of North and South.
Mum was a hardworking woman, who could turn her hand to everything. As well as knit, sew garments and hook rugs, she did all the wallpapering single-handed, and most of the gardening.
During the 2nd world war mother used to buy a tray of day old chicks from the market and a couple of baby ducks, which we fed on peelings mixed with bran and tea-leaves. They were raised in the backyard and fattened up for Christmas, then sold to the neighbours, who used to come into the garden and take their pick, feeling their victims’ chests to make sure they got the plumpest one for their money. They were then prepared for the oven.
My mother grew vegetables, too. While the hens were laying we always had fresh eggs when we were children. The powdered ‘muck” was kept for cooking with. We were never without meat. I learned very early in my life how to kill, pluck and dress a chicken, or skin a rabbit. Not that I’ve ever used that skill since, or even wanted to, but I was less squeamish as a child, when necessity was born of need. And you never know when such skills might be needed again.
Peter, my younger brother, befriended one of the ducks and turned it into a pet, so he noticed when it went missing. We were eating it for Sunday dinner at the time when he asked where it had gone. We told him it had flown away to live on the pond in a nearby park. From then on I had to take him to the park every so often so he could visit it. He was always able to see “his” duck amongst the others on the pond. He stopped bothering about it when he was old enough to realize that Santa Clause was a lie, as well.
Generally my mother enjoyed good health, except she was went deaf at the age of about 30. She was lucky in her later years to be given a good home with my sister Daphne, and her husband, where she lived happily for the remainder of her life.
Much of the history I research now for my novels was a part of my mother’s life - an upbringing in a two bed-roomed terrace with a multitude of siblings, several of whom died, and a multitude of stories to go with it. She helped to lay out those her deceased siblings for the required period, and placed pennies in their eyes to keep them closed.
Then there was her education at the church school, two world wars, survival of the Spanish flu pandemic and a world monetary depression in between. My mother had an upbringing where hard work and discipline were part of it, and expected (as a child she sold fish door-to-door).
That work ethic lasted her throughout her life and kept her active.
One of my novels, “The Coal Gatherer,” is based on tales she used to tell of her childhood in Seaton Carew. It was a hard upbringing. I wrote that book for her 100th birthday and dedicated it to her.
The last time I saw my mother was when I visited the UK for her century. She was proud of receiving a card from the queen, and the cottage was filled with flower tributes. The whole population of the village where she lived with my sister and her husband turned out for her party in the village hall, and she enjoyed all the attention.
Practical and thrifty to the end, my mother bequeathed her body to further medical science.  Bye mum.
Posted by Janet Woods at 4:27 PM

What a wonderful woman and a great inspiration. I know she has left a void in your heart. You were lucky to have each other.
Hugs hugs
Serena Tatti

Janet, you've often mentioned your very elderly mum and I am deeply sorry for your loss. But what a lovely testimonial you have penned. Peace.

Sorry to hear about the passing of your mother, Janet, but I was also thinking she must have been so proud to have such a talented daughter for a writer.
Best
Cathleen Ross

What a wonderful tribute. You painted your mother's life so vividly. I really enjoyed reading about it.

Hi Janet,
My deepest sympathy on your loss. But what a grand old lady your mum was.

How wonderfully touching. Thx for sharing your mum with us. (I will be carefully not to tell my chooks about yours though - plump chests or not!)

My dear mother lived to 92 years and still we grieve, no matter how long they are spared to us. Sincere sympathy, Janet, and thank you for sharing her marvellous life with us. My husband and I have been to Durham a couple of times and it is a beautiful part of England.