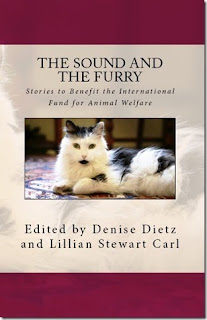 THE SOUND AND THE FURRY is a new story collection written by international authors.

The anthology contains one of my short stories, A GIRL’S BEST FRIEND. It’s about Fred the prize poodle, and the outcome of his love for the mutt next door.   And to paraphrase the title of Susan Coolridge’s book . . . What Katy Did! to.

The anthology will to be released in July and proceeds from sales will benefit the International fund for Animal Welfare.

There are twelve animal themed short story donations from published authors, the names of most who are probably familiar to you. Apart from myself, flying the flag for Australia in this project is saga writer Anna Jacobs who displays her short story skills with “Moving Day,” And then there is Annette Mahon’s, “Great Aussie Hunter.” But then, cats and dogs are the same in any language.

The delightful model posing on the cover is Mary Jo Putney’s late lamented moggie, Fluffster. The ebook will be released in June on Smashwords and other outlets.